A bird in the hand, or two in the bush?

A talk on whether to sell or restructure distressed assets

Owners of distressed assets are often confronted with the problem as to whether they should restructure them before selling, or to sell them "unrestructured". Although only a few restructuring cases make it back to the top league, owners face the question as to whether they're not selling at the worst conceivable moment if restructuring hasn't yet been carried out, thereby realizing only a comparatively low sales price.

Dr. Thomas Sittel, Partner at goetzpartners, provided some answers to this dilemma in a talk he held at this year's "German Distressed Assets Conference" in Frankfurt. 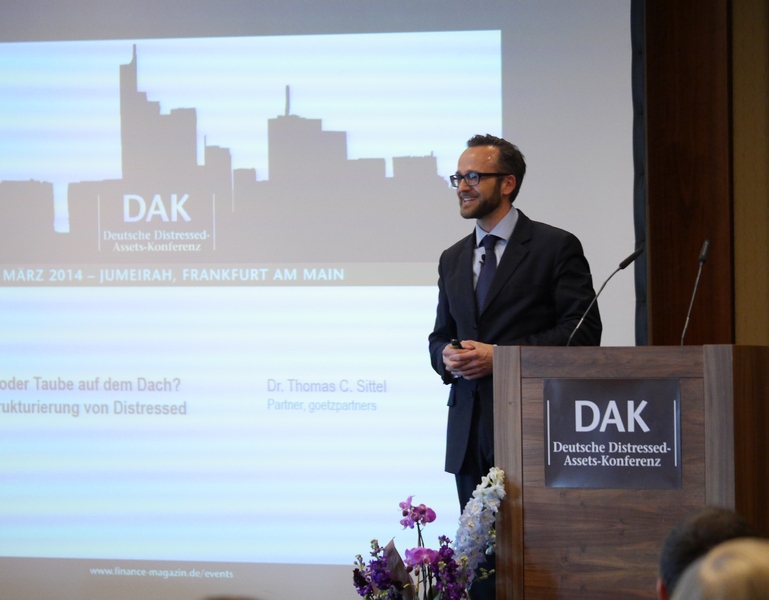 "From the perspective of both equity and debt investors, the decision is mainly a simple investment calculation. In general, we can say that a company's value will rise immensely if restructuring is successful – but only if it's successful. But gauging whether a restructuring is going to succeed is difficult – but critical nevertheless. Although practically all 'restructuring surveys' are couched in positive terms, say bankers, the reality is quite different," notes Sittel.

But how can you measure the probability that a restructuring is going to be successful? The complexity of restructurings, and consequently the probability of their success, depends decisively on the why the crisis happened in the first place, according to Sittel. He says that strategic reasons for crises, such as wrong market positioning, a change in the statutory framework, or changes to customer portfolios are much more difficult to manage than operational matters such as the optimization of processes or steering instruments.

A practical example
Sittel gives an example: Doll manufacturer Zapf Creation faced the challenge that girls were playing less and less with dolls, in addition to an increasing focus on technical toys. He notes that changes to the customer base and necessary adjustments to the product range were extremely complex, making it very difficult to see whether restructuring was going to be successful or not. Given this, he says that it is indispensable that investors subject business plans to a sensitivity analysis. Although some restructuring surveys calculate and present several cases, they are very rarely weighted to reflect the probability of success.

"It is precisely this 'weighted' case that should be used as the basis for an investment calculation," believes Sittel. "If you don't take it into account, the discounted excess returns from the comparison of a sale with or without restructuring frequently turn out to be significantly less than initially assumed."