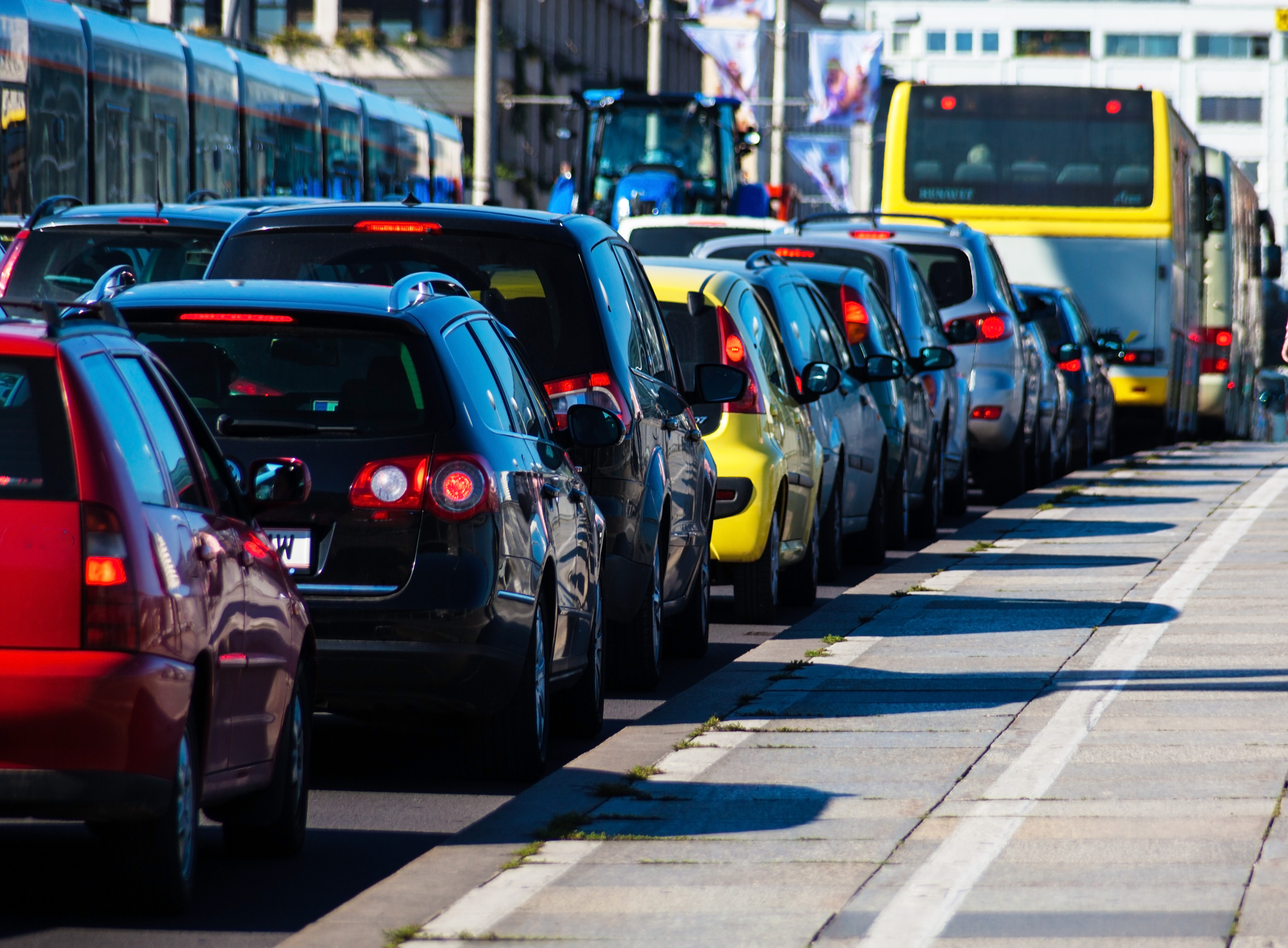 Summary:
Increasing urbanization is a challenge for traffic in many German cities. While motorized private transport in metropolitan areas is increasing, the road infrastructure scarcely meets the growing demand. Consequently, traffic congestion in city centers is becoming more severe and having adverse effects on pollution, noise levels and overall quality of life.

When strategically combined with intelligent public transport concepts, city tolling can smoothen traffic flows, drive modal change and provide additional means to finance complementary public transport and urban infrastructure. goetzpartners has assessed the suitability of a city toll in major cities in Germany, Austria and Switzerland. When introducing a city toll, cities should carefully consider the design of the toll scheme and the applied technology.

The increasing concentration of cities and their outskirts has led to a substantial increase in motorized private transport, particularly among commuters. Road infrastructure and public space cannot meet this demand, especially during morning and afternoon peak times. The number of traffic jams increases and besides the inherent hassle, there is an increase in the emission of carbon, nitrogen oxides and particulate matter. Consequently, congestion reduces the quality of life for the city’s inhabitants and even represents a severe threat to their health. 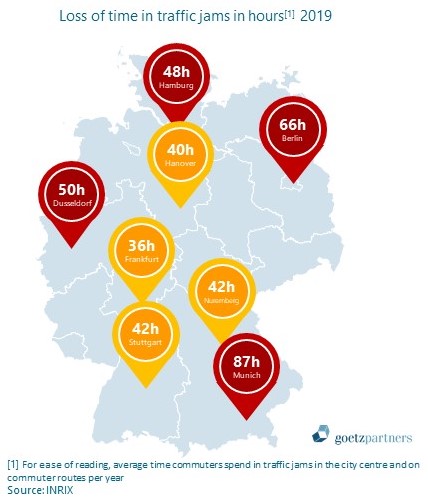 The significance of urban traffic congestion becomes apparent when looking at the average annual time spent in traffic jams in German cities in 2019: Commuters are estimated to lose around 87 hours in Munich, 66 hours in Berlin and 48 hours in Hamburg per year due to the overloading of urban road infrastructure. Beyond the inconvenience for those stuck in traffic, these traffic jams also have significant economic consequences. In the ten most-affected German cities, direct costs, calculated as the average salary multiplied by waiting time, amount to over 4.3 billion euros. Health implications will only be quantifiable in the long term. According to information from Germany’s environment agency (the Bundesumweltamt), in 2018 the annual nitrogen dioxide mean exceeded the safe threshold in 57 German cities.

A city toll as an embedded solution in the future smart mobility concept?

Going forward, cities need to consider reducing the volume of motorized private transport and embed related measures into an intelligent mobility concept. “Smart mobility” describes the connectivity, coordination and interplay of different transportation modes needed to ensure efficient traffic flows. Passengers and freight are moved in a fast, comfortable and affordable way, while simultaneously being secure and environmentally sustainable. Smart mobility therefore requires a well-developed urban mobility strategy, which necessitates long-term investment into road and rail. This is because most passengers are not prepared to swap sitting in their “cozy” cars in traffic jams for over-crowded, uncomfortable public transport.

A reduction in motorized private transport during peak times will be relevant for many cities' mobility concepts. This should, nevertheless, not be confused with driving bans: First, bans in city centers would reduce the attractiveness of commercial spaces, leading to all kinds of commercial activities being increasingly concentrated in shopping centers outside city centers and/or online. Second, businesses that are strongly linked to urban traffic, e.g. parking lot operators, would be deprived of their business base.

In contrast, charging a city toll as part of an intelligent city concept would reduce urban motorized private transport and help to mitigate traffic fluctuations. A toll can be demand-driven and efficient, since it charges the highest prices when the economic, social and environmental costs of traffic congestion are also the highest. It thus reduces congestion, noise and pollution and provides more space for public transport and alternative means of transport. Moreover, city toll revenues can be re-invested in the maintenance and expansion of urban road infrastructure and public transport, thus facilitating intelligent mobility.

Case example: The city toll in London has led to a more efficient traffic management

The strong concentration of jobs, tourism hotspots and leisure activities in the city center of London had historically generated unsustainable traffic volumes. This, in turn, caused various problems: daily traffic jams and slow-moving traffic, high air pollution and a financing need for urgent infrastructure investment. In February 2003, London introduced a city toll and established a toll zone enclosed by the ring road. Until 2006, the toll yielded revenues of more than one billion GBP, which were to be invested in improving public transport. The city toll has reduced congestion by around 25% and lowered emissions by roughly 15%. In addition, the attractiveness of bicycles as a means of transport has significantly increased.1) 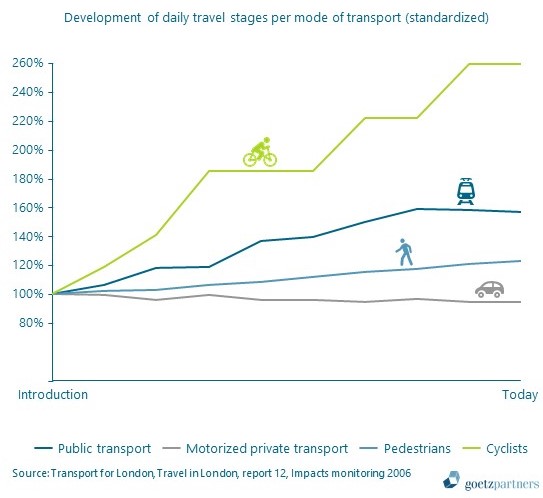 The design of a city toll depends on a city’s road infrastructure and the intended steering effect. Four generic city toll types, as well as four application criteria are depicted in the following illustration: 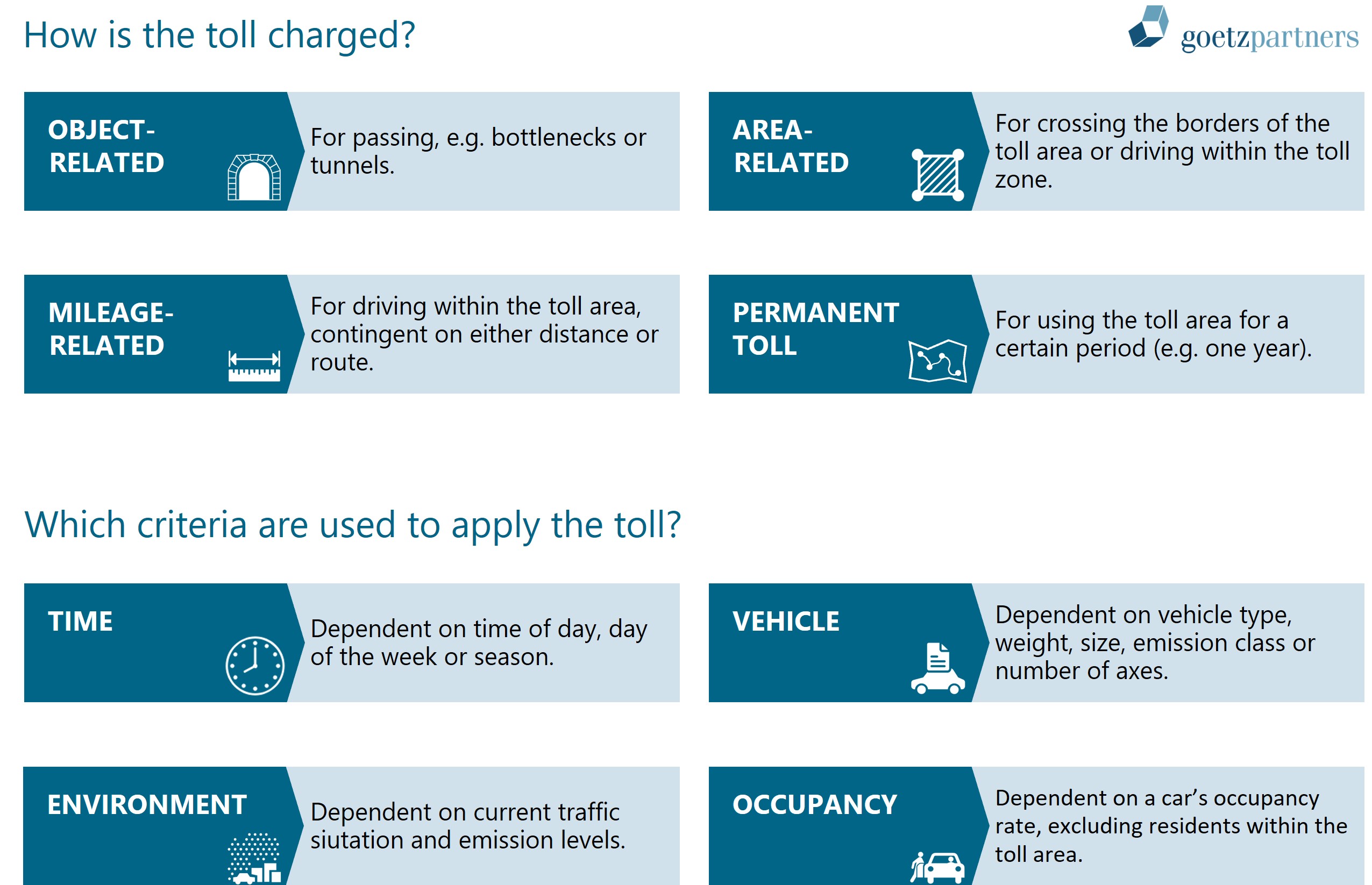 When considering real-life examples, two charging mechanisms dominate: First, an area-related city toll like in Stockholm, which is designed as a cordon solution, i.e. a fee for crossing the border of the "cordon" (= toll area), in combination with temporal differentiation and an increased toll for trucks. Second, an area-related city toll like in London, which is a combination of a fee for driving within the toll area with temporal differentiation and a vehicle-dependent fee.

The approaches for collecting the toll differ in their complexity and the technology used; furthermore, data protection/privacy concerns must be carefully considered. Five technical procedures for collecting and enforcing the toll are commonly applied: vignette, tachograph, camera-based tracking (by Visual License Plate Recognition, VLPR) and radio-based tracking (Dedicated Short-Range Communication, DSRC) and satellite-based tracking. Only the camera-based method with automated license plate recognition (applied in London and Stockholm) and both satellite- and application-based systems are suitable for a city toll. Data protection concerns can be mitigated for both methods: Positive cases recognized by the camera can be deleted immediately and with an application-based solution, the fee to be paid can, for example, be calculated on the driver's mobile device.

Whether charging a city toll is an efficient way to reduce private motorized transport depends on various factors. These include actual traffic volumes, resulting congestion durations and the use and quality of public transport. goetzpartners has assessed 25 cities in Germany, Austria and Switzerland for their suitability for a city toll to efficiently reduce traffic. The cities were compared across various factors, e.g. population density, geography, model split, intensity of use, congestion and commuter ratio, thereby covering the relevant determinants of traffic volume and the appropriateness of a city toll.

According to this model, Berlin, Munich, Stuttgart, Wiesbaden and Zurich, among others, are serious candidates for introducing a city toll, due to the high proportion of motorized vehicles in the modal split along traffic jam durations.

What cities should be considering now

In some urban areas, a city toll system creates real opportunity costs for individual motorized traffic. It can help to avoid congestion, increase public transportation utilization and provide cities with additional financial means. Because a city toll has an immediate effect on citizens' long-term plans, its introduction must be equally farsighted, controlled and accountable. The introduction of a toll therefore requires, on the one hand, a long-term concept regarding the analysis of price elasticities for charging effective and socially acceptable/predictable toll rates, and the development of an optimal cordon size in order to avoid unintended traffic substitution in the outskirts. On the other hand, a city toll scheme must be complemented by a comprehensive intelligent mobility strategy for the respective metropolitan area in order to ensure realistic, high-quality alternatives.